Caged Bird was a project that combined the two different objects into one single entity(swan and machine) to create an appealing scene. Inspired by the concept of the “island turtle” where there is a massive creature that transports a landmass.  Instead of a turtle with an island on its back I created a massive swan with a clock tower in shape of a cage on its back. I strive for more of a steampunk style appearance to the model where each part of the model would look like it is functional while still giving off the impression that it is a massive swan than can be operated.

For the project I used Maya 2015 and Photoshop to create the object. I first concept the object using multiple reference images of steam punk style objects, swans, cages, and clock towers. I created concepts of the parts of the final scene: different gears, wing formation, clock tower designs, and head details. After, I finalized the concept of object I used a reference of a swan to model the general shape and specific details: head, body shape, and beak. Next, I build on top of the swan’s general shape and created the parts of those objects and piece them together. I concentrated on the separate pieces of the swan and after finishing them I combined them all into one thing.

For the final render I generated Ambient Occlusion passes and rendered it in Maya mental ray on a Lambert material.

Through the project I learned hard surface modeling workflow in Maya and using Ambient Occlusion passes. 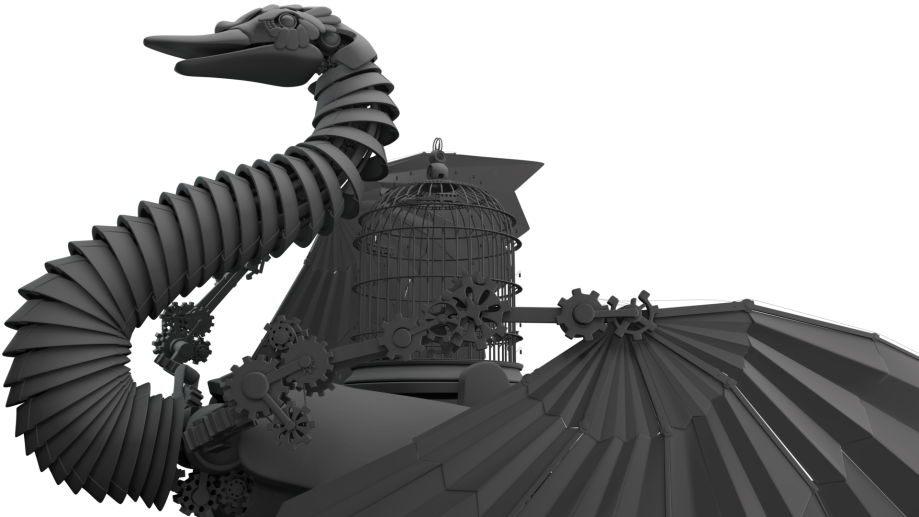